The emotional and physical strength and resilience of the “weaker sex” is an inherent theme in my work. I am also interested in teasing forth the darker shadow side of humanity as it pulses beneath the surface, drawing it out and shedding light on the spaces between motion and motivation. Heavy doses of humor, pop references and a sense of the absurd make these explorations compelling and palatable. Kaleidoscopic stories unfold around artifice and compulsion revealing themselves through non-linear, multi-layered collage-like spectacles that beg the question “is this getting better?”
The work reverberates on many levels echoing the consciousness of the viewer, providing drama and resonance while reaching into the secret soul spaces that thrum beneath the sensual assault of daily life.
The choreography is usually on pointe, but the movement expands well beyond the conventional forms of ballet as so clearly stated by Jack Anderson from the New York Times "instead of having dancers skim with balletic grace, she often had them stagger". The surprisingly controversial use of the pointe shoe happily places the company in the indefinable place betwixt and between ballet and modern dance. The movement vocabulary has developed through a multitude of dance styles creating a highly athletic lexicon that allows for great diversity of expression.
I believe it is within the scope of art to create space for reflection and connection, this in turn engages the vibrational level of the individual psyche, which then reshapes the collective unconscious. Dance has the ability to affect the audience on multiple levels often taking the viewer on a parallel ride through their own energetic body as they externally watch and internally take part in the show. This stimulates seismic shifts down to the cells.
As artists we take creative responsibility to make work and we must have faith in the integrity of the creative process- to allow our work to be what it is, and to accept ourselves as purveyors of the artistic expression of this current zeitgeist.
The slightly twisted explorations we present on stage juxtapose our mundane vision with that of Cervantes’ Don Quixote whose double-edged sword was the knack of seeing life not as it really is but as it should be! In dance I think it is time we sought specifically to support the whole and wholeness of our community on the local and global stage.
Posted by Laura Ward/Octavia Cup Dance Theatre at 11:53 AM No comments: 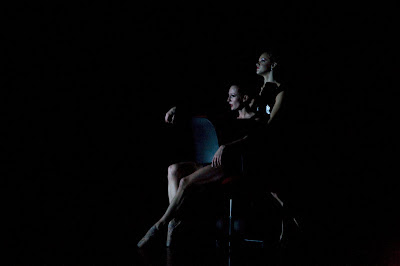