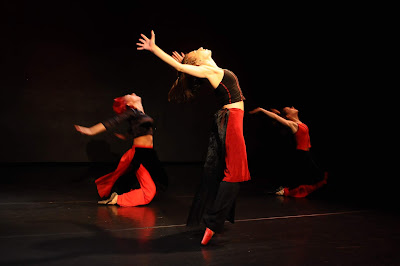 Recently, while teaching at Manhattan School of Music, my pre-college dance class dislodged some internal hilarity during small jumps.  Somewhere betwixt counts 16 and 24, close to the transition between jumps in 2nd and jumps in 5th, the laughter began leaking out, bounding into full contagion within 8 more counts.

Thankfully, it didn’t grow into an outbreak of mass psychogenic illness like the Tanganyika laughter epidemic of 1962, which began initially with 95 girls. The girls were afflicted for periods of up to 16 days and the laughter spread to neighboring villages, ultimately shutting down 14 schools and affecting close to 1000 people over the course of 18 months. In the Tanganyika case, there were other symptoms that accompanied the laughter including fainting and flatulence…

The MSM kids' movement-initiated release of laughter reminded me of a time when I was being Rolfed (a.k.a. Structural Integration- deep tissue bodywork). The Rolfer was digging into one side of the lower front section of my ribcage below my costal cartilage and inadvertently liberated a trove of laughter. It wasn’t tickle laughter. It felt like the funniest thing I’d experienced in ages. The deep touch to that part of my torso made me laugh so hard and it took a while to fully express. I was laughing for several minutes. Later when discussing this with my chiropractor, she said, “Oh that is so sweet, you uncovered some hidden laughter.”

We know laughing and crying are huge releasers and relievers of the bodymind. They massage and shake up the insides, joggle the heart, jostle lungs, and generally jangle the organs. If you laugh or cry long and hard enough you will also likely enjoy the benefit of a decent core workout. The kind of shaking and contracting expressed during laughter and tears can be wonderful medicine: squeezing, then plumping up, releasing tension in the organs and tissues, thus bringing life to your systems. Movement is equally vital to your vitals.

Our insides benefit from movement in multiple ways: it strengthens and hydrates the slippery tensegrity of our fascia, lubricating our joints, and improving blood flow, it also mobilizes our lymphatic system, which has no pump of its own. Our lymphatic system is a detoxifier of the body and is stimulated by movement and deep diaphragmatic breathing (like intense laughter or tears), in fact, therapies for the lymph include vibration and rebounding. Regular vigorous motion is helpful in avoiding the build-up of the vascular plaque that can lead to heart disease and stroke.

Spontaneous laughter used to erupt in my Pilates/Bartenieff Fusion classes when we did the shake-out with a yell. The exercise consisted of lying on our backs with arms and legs up in the air, taking in a deep breath, then yelling and shaking our limbs on the exhale.
It usually took about three rounds to achieve the full effect. This phenomenon took place in an upscale gym in the West Village full of adults. It was not as successful on the Upper East Side, however. In exercises like this, it is important to really let go.

Every experience we’ve ever had is stored in our bodies, our response, expression, or lack of expression is stored in our tissues.  It may translate to tensions held within our shoulders, hearts, stomachs, etc. In Laban Movement Analysis we call them holding patterns. As we experience the world we take in and take on our form through our interactions with our environment, this includes cultural influences, family dynamics and the physical world we inhabit.

As a mover/artist/creative person I believe expression is vital to the health of the bodymind, so when laughter breaks out in my classes I like to allow it to run its course.